A downloadable game for Windows, macOS, Linux, and Android

Citizen of Rome - Dynasty Ascendant is a family/Dynasty life sim set in the Roman Republic.

You get to see how life was in the Ancient Republic, participate in their various customs, festivals and Ludi / sporting competitions, while raising a family and moving up in the social and economic hierarchy in the Republic.

You can educate your children, marry them off, sponsor their elections and much more. You'll usually play as the eldest of your sons once your character dies.

The game is open-ended without a set endgame just like in real life, but a grand goal for any ambitious Roman family was to land a Consulship of the republic. This could be your goal in the game as well, climbing the Cursus Honorum and becoming a "New Man" - "Novus Homo"

WARNING: The game just like fate will beat you down from time to time and you might find all that you worked for being taken away from you in an instant, but the way things are set up you'll almost certainly end up growing wealthy and reach the Senatorial class at some point despite various setbacks. There is no game-over and life goes on no matter what

A core philosophy of the game is that just like in real life, there's no winning or losing, just experiencing life and having fun at it no matter where it takes you. The game should be fun in its own way at every level, no matter if you're a prole or a senator, but with things just playing differently and with different goals and challenges

Please contribute any ideas, bugs and suggestions via an email to rome@thestartupengine.net

Citizen of Rome - Dynasty Ascendant is also available on Steam

Join us on Discord - https://discord.gg/ZVkxjC5

In order to download this game you must purchase it at or above the minimum price of $9.99 USD. You will get access to the following files:

Support this game at or above a special price point to receive something exclusive.

As a release offer, we're giving away the game for the first 13 players

Hi there can we add a birth control sequence. Historically Romans do not control their birth due to diseases which may cause all children to die. Which is not reflected here, thus, its very expensive to have children.

For the wealthy Romans, because they have the money to hire doctors and medical care for their children, their children survive. But because of the high cost of education, many would restrict themselves until a child dies. Men are shown to avoid their wives and visit prostitutes or have lovers, which children born from the union can not inherit.

The game is very patriarchal even for Roman standards and they are a Patriarchy proudly. Daughters are completely ignored, which is not true for Romans who see their daughters as their heirs as well as their sons, and many Roman adopts their descendants or relatives through the female line to continue their dynasty.

And for the bachelor tax right. Roman Law state that the range is 25-60 for men, and 20-50 for women. However in the game, I get tax for character whose wife died and he is in his 60s. And the game start taxing the sons and daughters at 18 instead of 25 to 20. The tax is also never as the game which tax like 60-80% of the income.

We do try to keep the game as historically accurate as possible while still being fun and balanced, so any improvements or errors pointed out in that regard are most welcome

Regarding the celibate tax, kindly share any links to resources showing these numbers and we'd be happy to fix them up (also it is supposed to stop by the age of 50. And this has been so for some time, maybe you are on a much older version of the game? - please check your settings screen, it should be v1.3.3)

We may add a birth control event/choice going forward and an potential option to ask to adopt your sister's children, etc.

Please join us on our friendly discord to share and ideas/suggestions or point out errors to help make the game experience the best it can be - https://discord.gg/ZVkxjC5

Thank you for your patronage and for writing in!

Hi there.
Offer us, please, a 'mod' system (easy way, please), so we can improve the game with lots of roman citizen's rotine ideas, etc.

Can not install the game. I have sent the intallation error info many times.

Really sorry this happened. What platform is this on? Can you please email us any details at rome@thestartupengine.net 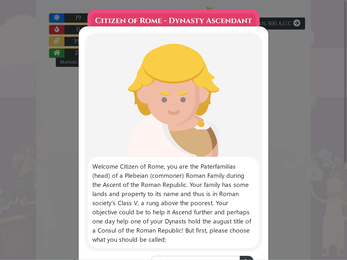 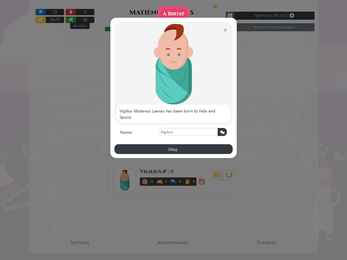 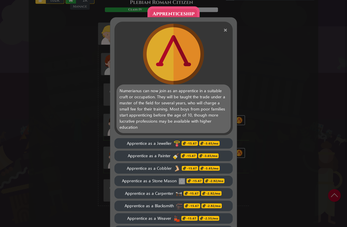 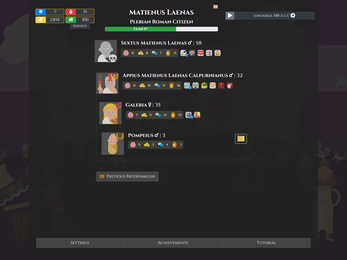 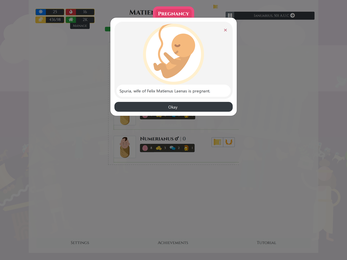 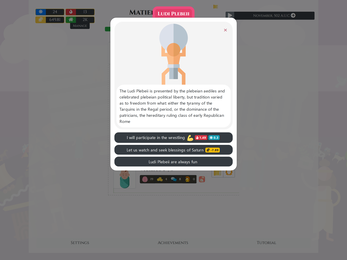 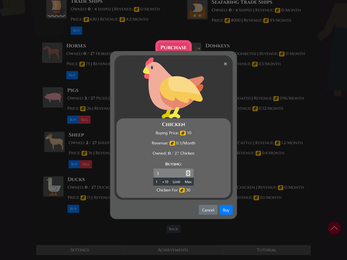 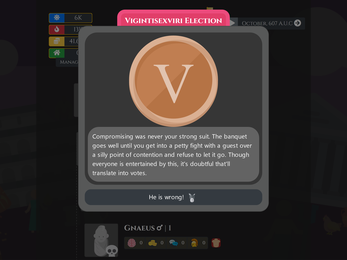 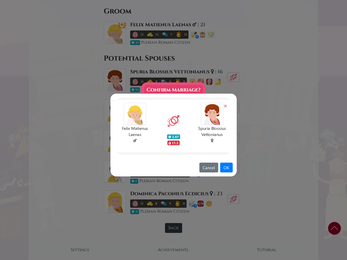